Today on my blog, I am happy to introduce a vibrant couple who has made a mark in the Netherlands. Through them, I intend to remind the aspiring expats that life in the Netherlands is all about colouring yourself in the Dutch colours. Connecting with Mrs. Jyotsana Mehra and Mr. Rajiv Mehra I got quite enamoured by the lady and the gentleman. Success for them was their commitment to themselves to achieve what they strived for. They proudly talked about their accomplishments despite all odds. In an interview with them, I got to know them as an inspiration for the expats. They believe in staying focused and determined to reach their goal in life. 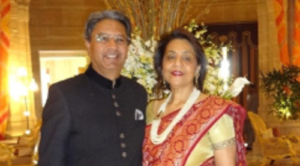 Mr. Rajiv Mehra came to the Netherlands in October 1976 and Mrs. Jyotsana Mehra, in May 1982. Both of them are today- hoteliers, real estate owners and philanthropists. What a fabulous combination indeed!!!

Mr. Rajiv Mehra has been associated with and is on the board of many organizations namely: Stichting Diwali Festival, NICCT, IBFA, NIA and Rotary. He is the founding member of many associations of the mentioned associated in addition to the Indian Business Chambers.

Mrs. Jyotsana Mehra has been the head of the Indian community of International School of Amsterdam and the British school. Most of her time she dedicates, helping young Indians feel at home in the Netherlands as well as getting involved in many charity projects. She has also set up the India desk at the Amstelland ziekenhuis (Hospital).

Mrs. Mehra reminisced how she felt when she initially came to the Netherlands. Her first culture shock was the concept of couples living together without being married but still be as dedicated to each other as though they were married. The institution of marriage in India is central to family life and relations. In the Netherlands however, having a deep, loving and committed relationship doesn’t necessary mean that one needs to tie the nuptial knot. So, it was quite a big difference.

The second culture shock Mrs. Mehra came across was when she went grocery shopping for the first time with her husband. She was shocked to see bagging your own groceries and then carrying them home by yourself.

I could relate to that gap, as in India it is quite different. We get helpers to do the shopping for us and then they will bring the stuff home.

Some privileged people have full time helpers at home who do regular cooking, unlike here, where you have to cook yourself the 3-course meal.

Probably this is the reason I too have lost inclination in eating standard three meals in an Indian way. It is far easier to grab a sandwich or eat fruits than to cook elaborate meals yourself. Anyway, completely going Dutch is on my agenda for 2020.

Well these were just small things she laughed over. The learnings she had from the Dutch society were quite meaningful. To her, the way the Dutch conduct themselves socially is quite impressive. She learned to respect the Dutch culture and integrated with them keeping her Indian culture alongside. Her focus was on never preaching anyone what they should do rather always tried to understand their ways and becoming more accepting of everything.

Being in the Netherlands, the core values of being non-interfering and accepting is what she values a lot. She has learnt so much from the Dutch over the years that she feels of herself as a native Dutch now.

I could notice the sense of pride in the eyes of Mrs. Mehra when she talked about her husband. She was very glad that they could together build their future. Mr. Rajiv Mehra then shared his passion for entrepreneurship and his success story. He always aspired to own a chain of hotels ever since he completed hotel management. On coming to the Netherlands, he joined the Okura hotel and Renaissance hotel. He had his own share of twists and turns as nothing comes on a platter. After great hard work and commitment, finally, in 1985, the couple opened their first hotel after expanding their business with other hotels and apartments (globally).

Talking about the language hurdle, I was curious to know if in the 70’s when Mr. Rajiv Mehra came to this country, language learning was mandatory.  On this he commented that Dutch are known for their language skills so speaking in English was never an issue for them.

In the early years, Mr. Mehra recalled that being an Indian was rare and people (locals) would happily stop him on the road to speak to him. The fluency of English might not be at the level we experience today but back then they were intrigued enough by Indians to make that communicative effort.

Dutch are quite accommodating to English. But it is good to learn Dutch – It solidifies business relationships and creates lasting foundation for commercial friendships.

It is really inspiring to learn about the success of such people who have fire in their belly. No doubt, luck favours those who put their head and heart into their dreams. For them country, language and culture are no barrier. They just have one mission that is to succeed, and all energy is directed towards that sole mission. This celebrity couple is a role model and their contribution towards the societal causes is like another jewel in their crown.

They dropped a last note saying;

“The Netherlands is a beautiful country and its people are extremely open minded. Accept them the way they are and walk with them instead of carving your nest away from them.”